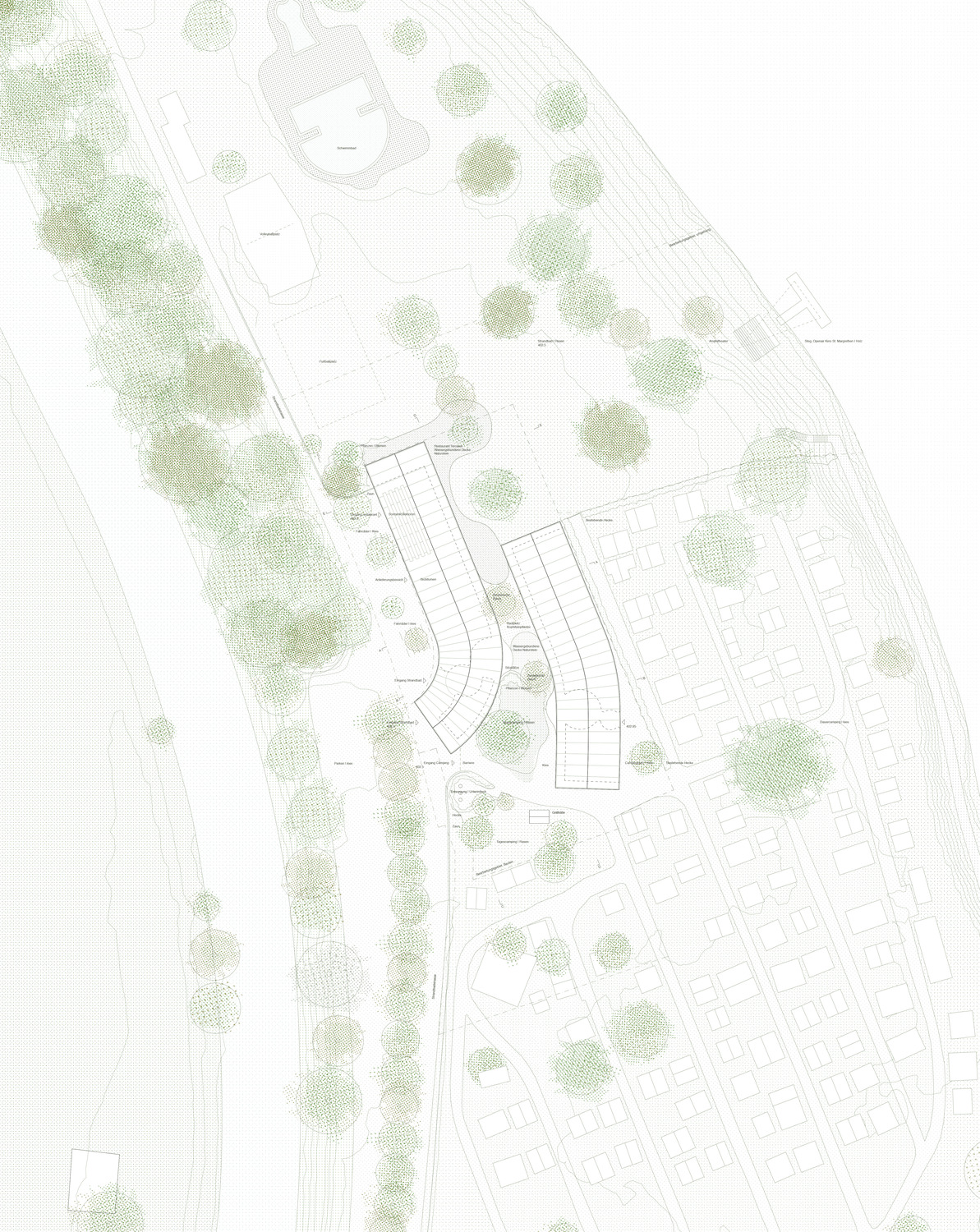 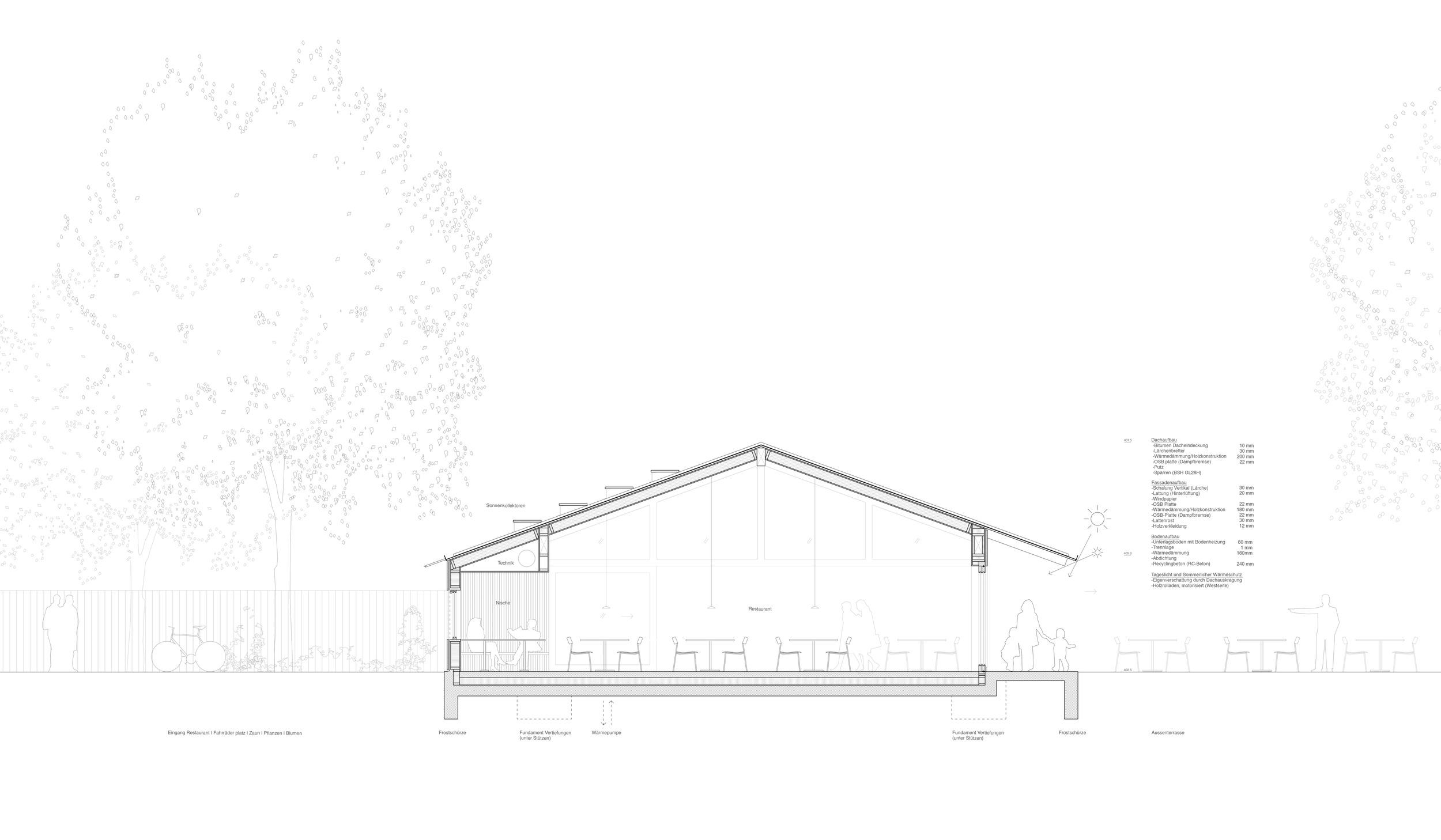 The Strandbad and its camping are set in an intimate green environment, situated in a bend off the old Rhein. The site, facing the waterfront with almost half of its border, surrounded by lush trees and with the alps on the background, has all the potential of being a small, natural oasis in the St Margrethen area.

The Camping is very popular and running proper. The Badi is well-liked with the locals and attracting a healthy amount of people each year during the season.

The combined facilities for both Camping and Badi though have had their best years. The Structure and Interior are out of date, the routing and orientation over two levels is facing criticism and a significant part of the buildings are ill-used. Additionally, there is a wish for a fresh look on the public space and the landscape of the site.

We propose to bring the project back to the human scale (single level) and natural character it had in the ’50. As a first step, we put all functions on ground-level under a simple roof. Then we split the functions into two buildings which we push away from each other to the boundaries of the Baufeld. By doing so we create a new public space in between where nature and people come together. Camping and Badi are physically and characteristically connected and between the two buildings a variety of outdoor spaces is created, activated by the buildings and its users. Like a small, vibrant village street.The two buildings open up towards the inner street While the outer façade of the building faces the parking and the Jahres-camping. Only locally on the South sides of both volumes an intervention of ‘bending and cutting’ is made in order to welcome both visitors and camping guests to inner street. On the western volume these cutouts form and emphasise the entrance area while guiding the visitors towards the center of the Project. On the eastern volume the cutouts form the heart of the camping facilities, with the auffenhaltsbereich as a social activator. By bending this volume away from the hedge, not only a connection between the Jahres Camping and the public street is created, but also a more private ‘camping square’ is created where camping guests on their way to the multiple facilities get a chance to meet, chat and hang out.

The two buildings are grounded on the site on a firm base out of recycled concrete. , A light, regular, rhythmic, larch wooden structure is placed upon the base. One single, vertical wooden slat is arrayed around all the functions. This forms a skin which is open, semi-transparent and breathing where needed. When enclosing other functions it is however opaque and protecting (visually and thermally) By doing so the slat articulates the functions behind it. Simple, firm sliding doors open the facade when the facilities are being used. The doors can also fully close off the building outside of opening hours.As a contrast to the fine rhythmic scale of the facade, the gently curved roof is kept as simple as possible. A protecting layer of bio-based bitumen, with its dark appearance, gives the roof an abstract and timid character.

The newly created ‘village street’ is set up as a sequence of moments, which all have their specific character:To start with, the tagescamping is transformed from a static linear field to a more attractive, naturally, green, organic and spacious area. Significantly increased in size, it pushes itself in between the two buildings, ending at the newly placed camping entrance road.On the other side of the road a grass field initiates the first connection with the Badi. This field, which still belongs to the camping, will form a more private relaxing area for the Campers.It can also be used as tagescamping when extra space is required.Between the grass-field and the eastern building an outdoor seating area for the camping is being created. The area will be fuelled by the already existing and popular grill-hutte on the one side and the new kitchen and living room on the other side. Here the campers can really enjoy their own social space away from the Badi.One continuous 45 cm high Solid Parapet forms the soft but formal border between the Camping and the Badi area. It meanders from the Camping Reception in the West up till the Family Cabins on the eastern side of the inner street. Besides dividing the two main functions of the project, it also forms a landscape furniture element which can be used along its full length.On the North side of the parapet a different type of outside space erects. This is the area where the Badi Visitors first enter the inner street and where most of the activity will take place. Created like a village square, this is where you will find a mix of hardscape (cobble-stone) and soft-scape (Soft Gravel), light sport facilities (table tennis), seating areas, a water fountain and the first picnic tables. All guests’ paths will cross: Campers going to the restaurant, visitors walking to their family cabins, kids playing jeux de boules and teens having an ice-cream. Becasue all functions are situated on ground level, interaction can be maximised when needed, while quietness is just around the corner in the green.North of the square and already half in the Badi field, another gravel area forms the transition between the village square and the restaurant area. Situated next to the Self-service area, under the trees, all can enjoy their warm snack from the bar or picnic with food they brought themselves, while watching their friends play a game of table tennis. The gravel field gently continues to the North where it flocks with the outdoor seating area of the restaurant.The extensive grass field between the restaurant and the lake will be kept in its existing form and character. As the rest of the Badi area is already significantly facilitated with leisure elements (like the swimming pools, water slide and volleyball field), this space will keep its existing serenity (and therefor its strength) of solemn grass and shading trees. Here, visitors who wish for less distraction, can choose their own way of using the space.At the end of the grass field, where the slope goes down towards the lake, we propose to create a tribune looking over a floating pier in the water. During the day this is a multipurpose area (from swimming and sunbathing to simple looking out over the natural surroundings). In the evenings the existing outdoor-cinema can take over and play movies with the Austrian Alps as a dramatic backdrop.

The project is clearly divided into six segments (three per building). The West building contains the Restaurant and its supporting functions on the northern part, Changing rooms in the middle and the entrance area on the South. The Eastern building has the garage in its Southern tip, camping facilities in the middle, while the Family cabins and Badi Toilets can be found in the Northern section.Warm and cold functions are clustered and kept together as much as possible to foster program flexibility andenergy- and cost efficiency..The changing rooms, living room and camping shop are divided over the two buildings. This creates a routing that crosses the ‘village square’ and thereby stimulates interaction and activity in this area. The reception is placed in such a way that it serves both Camping and Badi. The garage has all the in- and outside space it needs and is easily reachable from the badi and camping areas.The camping livingroom in the Eastern building forms the heart of the camping facilities. Here all guests come together to hang out, have a snack from the grill-hutte, cook their own dishes, read a book or play in the children corner.The Restaurant on the Northern tip of the project is laid out fully facing the green and lush grass field of the Badi. It has its own entrance from outside the site and can therefor also function outside of the Badi Opening hours. It contains a 50-seat indoor space. The facade can be fully opened to the outside terrace where another 150 guests can be seated. This terrace orientates itself in all directions and organically shapes itself under the shading trees and into the grass field.All functions are laid out on the Linear 625 m grid of the building. The grid creates flexibility, homogeneity and a clear identity. On this linear gird, the ‘cut-outs’, break with the homogeneity and express the more special and social areas of the , orientating both Badi and Camping visitors towards the village square. All internal walls are build up with a system of prefabricated wooden sandwich-panels. These panels areeasily adjustable to any future change of wishes.

The structural scheme was kept as simple, repetitive, and flexible as possible. One typical section is arrayed on the floorpans of both buildings. Placed on a five-meter grid, wooden columns are stiffly connected to the concrete base. The columns support the wooden crossbeams which on their turn hold the wooden roof-beams placed on a 1.25 m grid. Stability of the buildings is achieved by having all joints made stiff with locally placed bracing.

The building costs are kept to a minimum by implementing a three step strategy:The same structural section and infill is used throughout the whole project;A single level building eliminates costly basements and upper levels;All wooden structural elements are pre-fabricated. This concerns the columns, beams, sandwich panels for walls and ceiling.As St Margrethen is an ‘Energiestadt’, sustainability is put at the centre of the decisions made during the design process. Solar panels are placed on the western roof of the restaurant building, providing the full building with sufficient energy. Local (wood),sustainable (recycled concrete), and low maintenance materials will be used, working towards a circular project. A heat pump will support the energy needed for heating and cooling, reducing the energy footprint. Most of the wooden parts will be pre-fabricated and therefor significantly decrease the recourcenaufwand and building time on site. The maintenance costs are kept to a minimum as the full facade is made out of wood (easy to replace) and the roof is made of bitumen (little to no maintenance).Most importantly, the building as a whole will be imbedded in its green surroundings. With little visual impact and a healthy mix of activity and relaxation, a small, natural oasis is created in the St Margrethen area.